You know, I remember the first time I ever saw a tunnel under an A-frame. It was at the USDAA Nationals in Houston Texas in 1993 on a course designed by Kenneth Tatsch. My boy, Winston the Wonder Dog, took the wrong-course obstacle.

I went home determined to solve the riddle of to the “obstacle discrimination”. And frankly, I studied and developed some very reliable handling solutions.

At the end of the day, turns out, it shouldn’t be a matter of handling at all. What if I were to actually teach my dog the names of the obstacles so I didn’t have to handle at all? Instead, I could just give my dog the information and trust in training.

Having arrived at the wild notion that we will teach the dog the names of the obstacles the dog trainer has to figure out the methodology.

We start with the tunnel with the handler blocking approach the A-frame. Give a strong “Tunnel” command and release the dog. Praise and reward, so long as the dog goes in the tunnel.

In very small incremental steps the handler begins each rep slightly farther from the tunnel. This takes the handler out of a blocking position. The training will rely on the very basic training principle; the dog gets praised and rewarded when he gets it right. But when the dog gets it wrong the trainer very neutrally denies both praise and reward.

While the drawings above are nice and neat, I would be remiss not to share some of the painful beginnings of the dog training journey. It’s not all perfect and pretty, to be sure. Keep statistics. Over time the numbers will lift your spirits.

This video is a bit of a training mix. It illustrates a dogged training approach to our Named obstacle discrimination journey.

Move on to the A-frame

After fairly mastering the tunnel, the same method needs to be applied to the A‑frame. Initially the handler positions the dog directly in front of the A-frame while taking a blocking position on the tunnel.

Again, very gradually move back the starting position so that the tunnel is exposed as a wrong-course option. Be mindful that you only praise and reward successful tries.

Up to a point you concentrate on one obstacle or another. The repetition gives immediate reinforcement. But the dog might be cleverly extracting reward from her trainer. So, before too long you have to ask the question… do you know what it is I’m asking for.

This is a good time to begin keeping statistics on rate of success. You know that if you’re working around the 50% mark you should probably go back to a previous step for remediation. But if that number rises, you know you’re on the right track.

This exercise is a bit like throwing horse shoes. We introduce the approach to the A-frame/tunnel with a jump to establish movement. And then we ask the question… “do you know what I’m asking you to do?”

Don’t be too happy and content with simple tests of your training. What you really want to do when training Named Obstacle Discrimination is to test the skill from a fair distance. The whole point of the training was to have confidence in your dog’s understanding of which obstacle to take without the handler being in the middle of the picture micro-managing that performance. 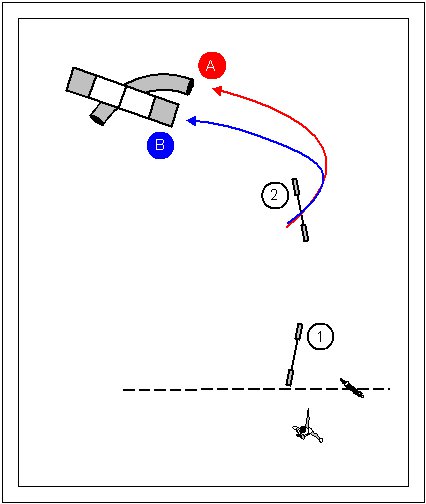 What I would like to do here is stay behind the dotted line while my dog works forward. From a fair distance, I can ask the question… “do you know what I’m asking?”

This exercise has a couple prerequisite skills… notably, left and right.

While Cedar had a successful workout, demonstrated by the video, I am very aware that skills like this need constant reinforcement and refreshment.

Editor’s Note: There were several other recordings of this training series. To present them here would have dragged the story down a bit with the repetitive nature of dog training. That being said, look at these pictures and videos as an overview. It is worthwhile to note, however, that the entire training endeavor took less than three weeks with daily practice.

This was an NDAL league play game back in August of 2015. It’s a distance gamble kind of game. The dog earns bonus points for working the dog at a distance. Obviously, this demands proofing of “Named Obstacle” discrimination.

My boy Kory had a pretty good showing. And I feel no embarrassment that I designed a game for league play that tests a skill that I take pains to teach my dogs.

In retrospect, I’m amazed that Kory could hear my commands with all the barking (my other dogs) in the background.